Last Friday some of  my neighbors and I were playing  kindergarteners. But I was a pre-schooler!

We use dry autumn leaves as patterns to make prints on the paper.

My neighbors put paint on the leaf to make prints on the paper. They look great! I tried that way. But the leaf slipped. The prints came out awfully!  So I tried the other way around to put the leaf on the paper and hold with my water jar. Brush the color around it. It should have the uncolored white shadow show on the paper with the colored background. But what a mess was it!

I took it home. Peter saw it. He thought that was great!? I wasn’t really impressed with what he had said because whatever I brought back from the craft class, he always says:”Very good!”. So I through it onto the table carelessly! I was not pleased with my picture today.

This ugly one was mine!

An hour later I was playing with the computer, Peter came in with that ugly picture in his hand and talking to himself: “What a pity! Such a nice picture just though it on the table!”

He put it on the wall, his favorite corner next to his bed. And said: “Isn’t it a beautiful picture! Don’t you know how to appreciate it? That is a piece of real artwork! ”

I was always thinking of to change a new husband. But, now, I decided to stay with him until the end of the world!! 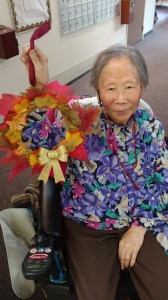 I am trying to tell a lovely story of a Chinese artist who crocheted some life sized and as beautiful as real flowers and butterflies. She wished to pass on her skill to bring happiness and joy every where.

Tags (the bigger the more articles)

life with a chronic disease and a really big yarn stash

A blog containing random thoughts, bits of life, creations from my art room and tales of a cat named Orlando and a puppy named Siddy

on health and wellness, nature, gardens, and grandkids, because in my world they are interconnected!

Callers Of The Moon-Song On A World of Ice

Art and Lifestyle by Brandon Knoll

random thoughts 'n things from the life of jacob

How important it is in life not necessarily to be strong, but to feel strong.